The Dento LIVE livestream online event is to be held on the same day as the fashion show
Experience the transmission of culture from Mt. Hiei in real time

Creators of traditional handicrafts and influencers from Generation Z will play a central role in spreading culture from Hieizan Enryakuji Temple, with the birthplace of Tendai Buddhism, a renowned wellspring of Japanese culture, as its symbol. We aim for this to be an opportunity to share the light of culture through experiencing content which will include traditional handicrafts, art, fashion, and music. 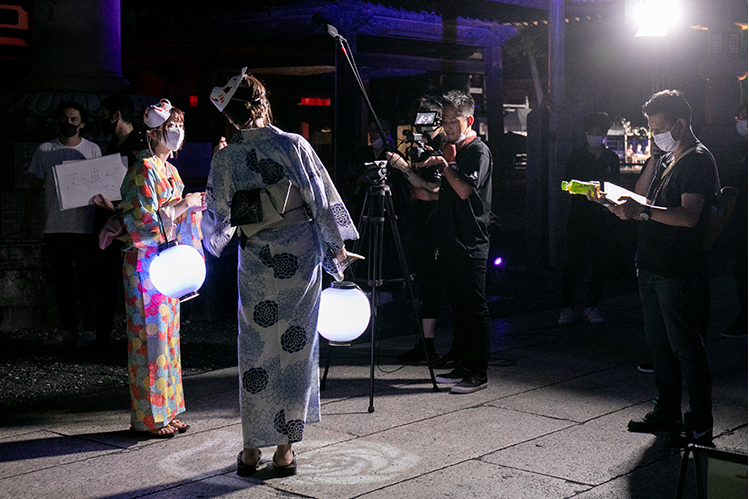 We will livestream on-location programs touring the Hieizan Enryakuji Temple Eastern Pagoda in real time on our web platform, as well as on social media. Influencers from Generation Z will serve as navigators who direct the course of the program, and share opportunities to learn about Japanese history and culture with the younger generation.

※ The photograph is an image

A TikTok star with over 1.1 million followers, she makes use of her expressiveness and bold funny faces to create unique content on makeup, singing, dancing, and other lifestyle-related subjects across different genres. She lives in Nagoya and creates content as a creator while working as an employee at a video production company.

A talent affiliated with ARTORY, she has appeared in numerous live-streaming e-commerce programs, including regular appearances on the online TV program "Solution Variety Program ARTORY ACADEMIA," which is streamed on YouTube every Thursday at 10:00 PM.

In Dento Live Commerce, artisans who support traditional culture will participate in live commerce, the cutting edge of e-commerce. The plan is for viewers to be able to purchase works while they communicate with the cast during the program. An audio guide function provided by simultaneous translation is planned in order to share the beauty of Japan through digital hospitality.

※ The screen is under development 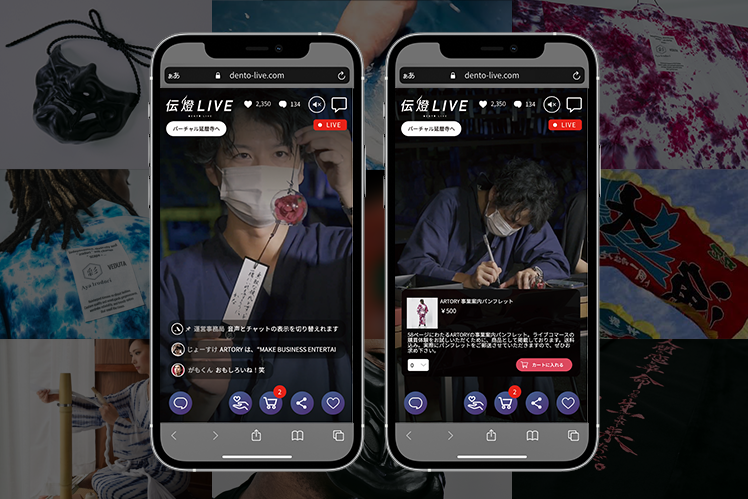 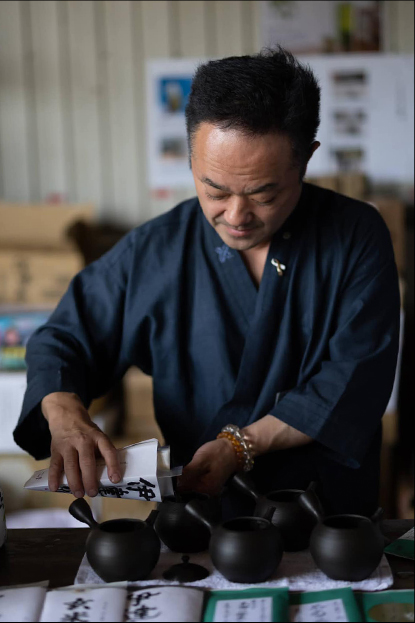 宮Toru Yabe is a certified tea master and the third-generation owner of Yabe-en Chaho, a long-established tea store in Miyagi Prefecture that was founded over 80 years ago. As someone who cherishes the devotion required to produce and brew tea, he performs every step from working the soil to harvesting the tea leaves and preparing the finished product with great care, which has led to the tremendous popularity of his teas (including sencha, genmaicha, and gyokuro of the finest quality) around the world. Among his various activities are his efforts to actively promote Japanese tea culture, including giving lectures on how to brew sencha on JR East's Train Suite Shiki-shima. He has also received a one-star Superior Taste Award in 2022 from the International Taste Institute.

A talent affiliated with ARTORY, she has appeared in numerous live-streaming e-commerce programs, including regular appearances on the online TV program "Solution Variety Program ARTORY ACADEMIA," which is streamed on YouTube every Thursday at 10:00 PM. 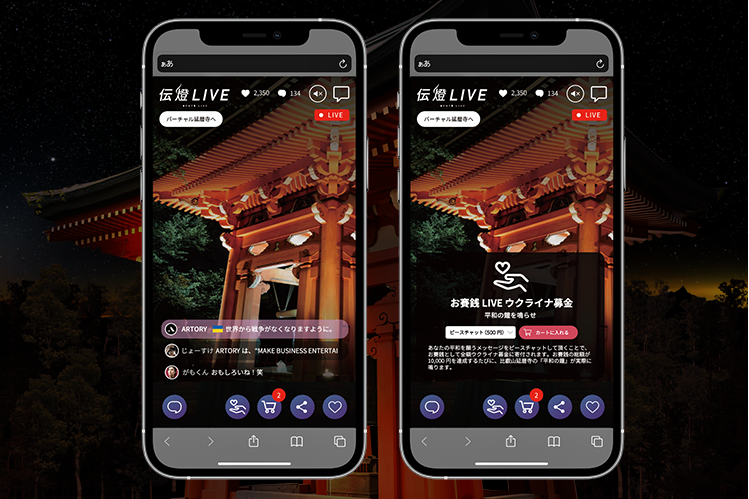 During the Dento Live Commerce stream, we will run the Peace Bell LIVE collaborative project to raise money for Ukraine. Users will buy “peace chat” on the screen, sending in messages of peace. The chat text will be displayed on the screen with the Ukrainian flag. All of the money collected will be donated to Ukraine, and the peace bell will be struck each time a fixed amount is reached, with the sound of the temple bell streamed in real time.

※ The screen is under development

A donation will be made to support Ukraine through Terra Renaissance and the "AI NO TAMENI AI NO NAKADE Executive Committee," an organization run by Arashi Moritomo of the rock band T-BOLAN.

DENTO LIVE will donate the money raised through two support campaigns to Ukraine relief through both Terra Renaissance and the AI NO TAMENI AI NO NAKADE Executive Committee, an organization headed by Arashi Moritomo of the rock band T-BOLAN. Moritomo has served as the Hieizan Enryakuji Temple Goodwill Ambassador since 2013 holding the "Inori no Tsudoi (Gathering of Prayer)," an annual live dedication performance on the premises of the temple. 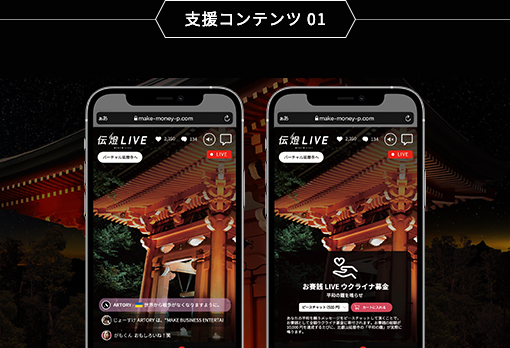 When you purchase a "Peace Chat" on DENTO LIVE Commerce distribution screen and send a message, a chat with a Ukrainian flag will appear on the screen. Whenever a certain amount of money is reached, the peace bell will be struck and the sound of the bell will be broadcast in real time. 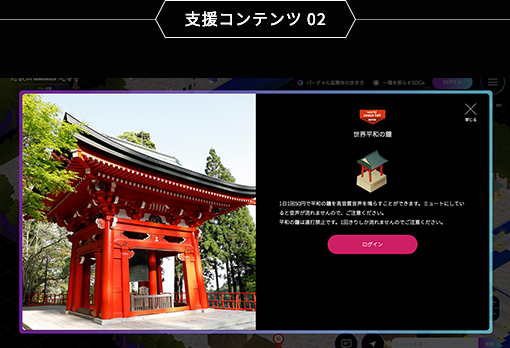 This project allows visitors to purchase and listen to the sound of the bell once a day at the virtual Hieizan Enryakuji Temple by visiting the spot in front of the main auditorium on the virtual map, where the bell tower is located. 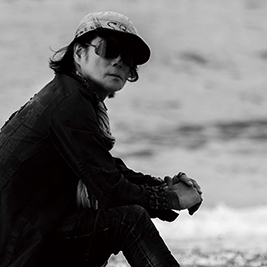 Vocalist of the legendary rock band T-BOLAN. Born in Hiroshima, Japan in 1965, he writes lyrics, composes, and arranges music. T-BOLAN debuted in July 1991. In just four years, the band had sold a total of 17 million records. Their second single, "Hanashitaku wa nai (I Don't Want to Let Go)" was an exceptional bestseller. Since their major label debut, they have had numerous hits, including signature songs like "Bye For Now," "Jirettai Ai (Vexing Love)," and "Maria," and continue to be known as a "legendary band" representing the 1990s. In 1994, Moritomo suffered from a voice disorder of unknown origin and was unable to sing for awhile. In December 1999, T-BOLAN temporarily disbanded. In November 2009, he restarted his music career as a solo artist under the name "Arashi Moritomo." In 2012, he started live dedication performances at shrines and temples such as Enryakuji Temple on Mt. Hiei, Kodaiji Temple in Kyoto, and Itsukushima Shrine in Hiroshima with "Otokotachi no Utage (Men's Banquet)." He also sang the image song for the Tendai Sect's Grand Memorial Service for the Patriarch's Precepts. In 2013, T-BOLAN was appointed as the "Hieizan Goodwill Ambassador." T-BOLAN reunited in 2017 in response to the enthusiastic support from their fans. The band has been very successful adapting to constraints caused by COVID-19, combining a nationwide tour with a successful live streaming of their performances.

Questions regarding the project and media inquiries are handled at this address.